How to make the best decisions 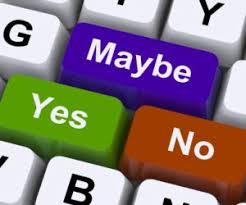 Often clients ask my opinion on whether they should or shouldn’t take a certain action. In my effort to empower them to answer their own questions I’ve come up with a simple two question protocol which works wonderfully. The protocol is: ask yourself these two questions and if the answer isn’t ‘yes’ to both questions don’t take that action. The questions are:

Remember, if the answer isn’t a firm ‘yes’ to both questions then don’t do it. This protocol is especially great for those people who don’t tend to put themselves first, don’t tend to say “no” and are people pleasers. I always say that the nice people have the biggest problems.

If you need further help in making a decision here’s what I suggest. Firstly, stop thinking that there are right or wrong decisions. Stop thinking that there are good or bad decisions or paths to take. Labelling things that way does not help and can create guilt which clouds your ability to make decisions even more. There are only choices that take you towards who you want to be, or away from who you want to be. So, another way to make a decision is to ask yourself:

To answer that question you need to know who you want to be. You need to have a clear idea of your values and your goals, especially who you want to be as a person (and less importantly what you want to achieve). If you don’t know this how can you possibly make decisions that will benefit you? If you don’t even know where you are headed of course you will be unsure of the best path to take.

One of the things I help my clients with is gaining clarity on who they want to be as well as where they want to be. When I help them get clear on the type of person they want to be (and it makes no difference if they aren’t that person now) it’s easier to know the most beneficial path to get there. For instance, if the person you want to be is open hearted, loving and helps others, then taking a job as a bouncer might not take you towards that goal. In fact it will probably take you away from it. If one of your goals is to be surrounded by positive, happy people who uplift you, then taking a job working on your own doing admin probably won’t take you towards that.   It’s all about being clear about the destination, and the destination is how you want to feel, especially about yourself.

I’ve helped people make decisions on things like whether to leave a relationship. Whether to get deeper into a relationship. Whether to sell or buy a business. Whether to move cities or countries. Whether to speak up or keep quiet. Which job to take or to apply for. I believe that most people come to me already knowing the best decision, but that ‘knowing’ is clouded, so they can’t see it. Our ‘knowing’ is clouded by emotions such as fear, worry, guilt etc. It is also clouded by limiting beliefs from the past. For instance, if someone is having trouble deciding whether to propose to his girlfriend or not, that decision might be clouded by his ‘belief’ (keeping in mind that beliefs aren’t always based on truth) that no one is ever faithful. Perhaps he witnessed one of his parents having multiple affairs and his beliefs about marriage are clouded by what he, as a child, thought that meant. When I clear away the limiting beliefs and the negative emotions, including fear, and we use the protocols above, then it is always obvious to the person what their best option is.

Sign up to our newsletter for inspirational advice and tips straight into your inbox.
Privacy Policy: I hate SPAM and will never sell, rent or otherwise give your details to any other party. Additionally, you may unsubscribe at any time and I make it clear how to do so on any newsletters sent (I never send more than one a month).
Video
Watch more videos